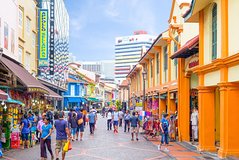 After pickup from your hotel, begin your tour in Singapores Civic District, DRIVE PASS government buildings and landmarks such as Parliament House, the Cricket Club, and the National Gallery Singapore. Lau PA SAT

Continue the tours and stop at:
*MERLION (half-lion, half-fish) statue. ( 30MINS )
*CHINATOWN - VISIT Buddhist-Taoist temple of Thian Hock Keng, one of the oldest of its kind in the city ( 60MINS )
*Arab street  SULTAN MOSQUE & AREA
*your last stop in the Little India neighborhood. ( 30 mins )

Finish with a drop-off at the original departure point and ponder which places youd like to return to on your own.

Once an enclave for Singapores Chinese immigrant population, the Chinatown of today is much-beloved for its blend of old and new, with historic temples and traditional medicinal halls sitting alongside bold new bars and trendy lifestyle shops.

The Singapore Cricket Club is one of the premier sports and social clubs in Singapore. Its clubhouse is located on Connaught Drive on the south end of the Padang in Singapore's central business district.

The National Gallery Singapore is an art museum located in the Downtown Core of Singapore. Opened on 24 November 2015, it oversees the worlds largest public collection of Singaporean and Southeast Asian art, consisting of over 8,000 artworks. National Gallery Singapore aims to provide an understanding and appreciation of art and culture through a variety of media, focusing on Singapore's culture and heritage and its relationship with other Southeast Asian cultures, Asia, and the world.

The Parliament House of Singapore is a public building and cultural landmark and build houses the Parliament of Singapore. It is located in the Civic District of the Downtown Core within the Central Area. Within its vicinity is Raffles Place, which lies across it from the Singapore River, and the Supreme Court's building across the road. The building was designed to represent a contemporary architectural expression of stateliness and authority. The prism-shaped top, designed by former president Ong Teng Cheong, was similarly a modernist take on the traditional dome.

Little India is a buzzing historic area that shows off the best of Singapores Indian community, from vibrant culture to incredible shopping.

The Merlion is the mythical symbol of Singapore and easily the most popular attraction on the whole island. Come to visit this half-fish, half-lion statue during the day to witness crowds of tourists all bustling for position for Singapores most sought-after photo-op in front of the 70-tonne concrete figure. The statue stands 8.7 metres tall and has a fountain of water spurting out into the picturesque Marina Bay

Singapores oldest Chinese temple is steeped in heritage, and is a must-visit for history aficionados and those curious about oriental culture.

Visitors who enjoy a little bargaining will find it here among the historic shops selling textiles, perfume and more. Along with traditional Muslim food offerings, some Western restaurants have settled into the area, creating a Singaporean blend of cultures. Make sure to stop at the islands largest mosque, the Sultan Mosque, a landmark in the Kampong Glam Malay Heritage District.