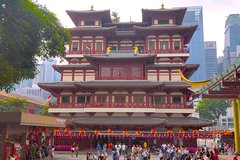 2hrs Walking Tour in Chinatown (Coffee Break on your own)

This is a special location for all the Chinese when they first arrive on this Island.. Why did the Chinese made all the way to this Island dispite all the danger of the seas?

Having to work and live their life here in Chinatown, the coolies faces alot of temptation and social evil..many of the streets in Chinatown share the stories of their struggles.

Finally the street of Death in Chinatown, how did all the co-exist during those days? The Japanese has spies inside Chinatown and how did the information leak?

Come and Join me to find out our early Chinatown and it's stories.

The oldest Chinese Temple in Singapore and its many stories of how Chinese were making their way to this island to find hope.

Al-Abrar Mosque is one of Singapores oldest mosques. Also known as Chulia Mosque, the mosque reminds us of the Chulia's immigrants who once lived in the same area as the chinese and played a important role in developing the finance economy of early colonial Singapore.

Ann Siang Hill stories and the last century water well in the City.

Built in 1827, the city's oldest Hindu temple in a Chinese district and featuring a tower densely with deities. Enter to a close up view of the painting.

The Buddha Tooth Relic Temple and Museum is a religious and cultural institution located in Chinatown, which houses a relic said to be a tooth from Buddha.