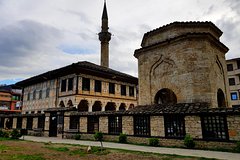 Placed at the bottom of the Polog plain, at the foot of the ar mountains and at the gates of Kosovo, Tetovo is the 5th largest city in the country and the "capital" of the Albanian minority. Its current appearance does not make it, a priori, a tourist destination of the first order: a large city of socialist look to gray buildings, for some still scarred by traces of fighting in the civil war of 2001.

Discovery of the painted Mosque of Sarena Dzamija dating from the fifteenth century. Painted both indoors and outdoors, it is one of the most beautiful mosques in Macedonia.

Similar to a Christian monastery, this Islamic complex is one of the most valuable religious monuments of the Republic of Macedonia and the Balkans. It belongs to the brotherhood bektashi, one of the branches of Sufism, the mystical current of Islam, close to Shiism.