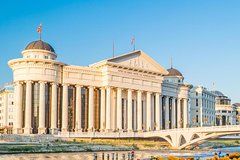 On this E-bike tour, you will have opportunity to explore Skopje city area in a different and fun way riding e-bike. You gonna visit some of the most interested touristic attraction in the city like: The Statue of Alexander the Great, Gate Macedonia, Stone Bridge and lots of new monuments, statues and buildings from the project Skopje 2014th. From the Main Square we go on the other side of the river Vardar in the old part of the town, know as Skopska Charshija. In this area we are visiting some of the most significant buildings form the Ottoman period, like Daut Pasin Amam, Kapan An, Chifte Hammam, Kurshumli An, and Mustafa Pasha Mosque. Than we are visiting Skopje Fortress Kale, which offers magnificent view of the city. From the fortress we go to the City Park, visiting the National Arena and riding through the Park. After this ride, we return to the starting point.

The desire to pay respect to Skopjes most famous person and the only Nobel Peace Prize winner from Macedonia culminated in the realization of a long-standing vision  building a Memorial House for Mother Teresa. Accordingly, the foundation stone of the Memorial House was laid on May 9, 2008. The building, dedicated to the most humane woman in the world, was completed in just nine months. For visitors, the Memorial House was open on January 30, 2009.

The location of the museum is not randomly chosen. That is to say, on this exact place the old Catholic Church Sacred Heart of Jesus used to stand. It is where Mother Teresa, then Gonxha Bojaxhiu was baptized just one day after her birth.

Since the opening of the Memorial House in 2009 until today, the number of visitors ranges from 80000 to 100000 per year, including a number of presidents, ministers, ambassadors, church dignitaries, the niece of Mother Teresa  Age, Cardinal Pietro Parolin (Vatican secretary of state) and others.