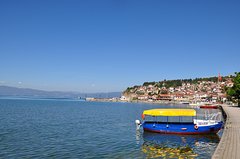 This is a tour aimed to explore one of the most important towns in Macedonia, for those with very limited time or even if you are just passing by.

The city of Ohrid situated on the shore of the Lake with the same name is one of the oldest human settlements in Europe of the most visited places in the country. In ancient time known by the name of Lychnidos (the City of Light), it became an important trading centre. As an important Christian place of pilgrimage, Ohrid became a place where new styles of fresco and icon painting were found.
Ohrid and Lake Ohrid are on the list of world protected heritage sites of UNESCO since 1980.
The tour starts with visit of the main square. Than continue with the visits of the old part of the city. We will visit the church of St. Sophia, one of the most important monuments of Macedonia, housing architecture and art from the Middle ages It was built in the 10th century over the foundations of an early Christian basilica.