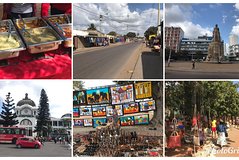 Choose from the list below 10 places that you would like to see in Maputo and drive with us.

If you have no idea where to go, do not worry, we have several proposals and we will do according to your interest.

You will have a great company of someone who is full of joy and really love the work that she does.

You will have a tour guide who can answer your questions if he can answer them.

You have 4 stops to appreciate the monuments of your choice and see how beautiful and rich of stories is city.

The institution has several collections of animals embalmed (directly from the African savannas) such as lions, giraffes, hippos and rhinoceroses), sheltering one of elephant fetuses [2] - from the first 22 months of gestation - since World War I, being the only one in the world, besides images, statues, musical instruments and accessories of Mozambican tribes.

Maputo Fortress is a national monument related to the history of the Portuguese presence in Mozambique and to the relations and resistances offered by the inhabitants of the lands of the banks of the bay in a context of commercial rivalry between several European countries. The military fortification, made with stakes, integrated the area of ​​the bay and was designated by Prison. In the bay there was a ship at his service.

The yellow house is probably the oldest building in Maputo.

The National Coin Museum has a collection of material depicting the history of the country as well as the Southern Africa Region for several centuries. It gathers in its collection about 4300 coins, moneteiformes pieces, notes and medals, being 1000 referring to Mozambique.

The Maputo Railway Station is an imposing building, designed by the architects Alfredo Augusto Lisboa de Lima, Mário Veiga and Ferreira da Costa, built between 1913 and 1916