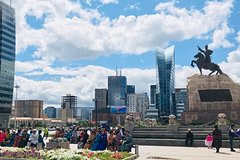 Ulaanbaatar is the capital city of Mongolia. Ulaanbaatar city day tour will give you an opportunity to explore the main attractions that include the Mongolian National museum, Sukhbaatar Square, the oldest Buddhist monastery the Gandantegchinlen, also you have the choice to go to Zaisan Hill to have the panoramic view of the city OR drive to the Gobi cashmere store to shop for one of the finest cashmere in the world. Followed by enjoying the performance of folk song and dance ensemble.

Built in 1809 the monastery is situated in the heart of Ulaanbaatar city and still remains as the main religious center for all Mongolians. Inside you will see the 26m tall indoor statue of Migjid Janraisig, which is the 2nd statue of its kind.

National Museum of Mongolia is the first museum in Mongolia. It was established in 1924 and became the basis for other museums, This museum is a cultural, scientific, and educational organization, which is responsible for the collection, conservation and interpretation of the objects under its curation.

It takes 600 steps to reach the top of Zaisan Hill and enjoy the birdseye view of the whole Ulaanbaatar city.

OR instead of Zaisan Hill

We will drive to the world famous Gobi Cashmere store to buy some of the finest cashmere products.