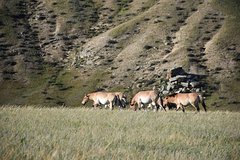 Let us take you to the world's only species of Wild Horse, Takhi (or Przewalski horse) in Hustai National Park, Mongolia. This is a genuine ecotourism site-a paradise for wildlife lovers. Take a part of a two-day visit to this tranquil wilderness, only an hour drive from the occupied urban setting of Ulaanbaatar. The area also offers you memorable landmarks of Ungut and deer stone dates back to the Bronze age (3,000-7,000 BC).

The Hustai National Park is located about 110 Km west of Ulaanbaatar, on the foothills of eastern Hentii Mountains. This is an example of the preservation of one of the most endangered ecosystems in the world: the steppe. This national park is a great example of the vast valleys of rivers, which are divided into hilly terrain which characterise the forest steppe. Dozens of wild creatures are here, such as tigers, deers, and takhi, reinstated in 1990 with the assistance of the Przewalski Horse Foundation reservations and the Netherlands Government.

Wild life exploration in Hustai National Park will be one of the highlights of the trip where you will encounter the Wild Horse Takhi, the only wild species of horse in the world, and other wild species. A wildlife specialist will accompany your safari. In the evening, enjoy sparkling stars in a pitch dark sky in a peaceful rural setting.
Duration: 12 hours

Stop At: Hustai National Park, Ulaanbaatar 13 Mongolia
After breakfast, drive to Ungut monument, one of the largest collections of stone men in Mongolia. A stone man or otherwise known as a balbal dates back the 6th century AD during the Turkic statehood existed at current Mongolias territory. You will also explore a deer stone, Bronze Age monument dating 3000-6000 years. Visit a local herder family near the national park and experience centuries-old nomadic culture of Mongolia. Have your lunch with the nomadic family. After lunch, optional horse riding is available at your own cost. You will continue driving to Ulaanbaatar in the afternoon.
Duration: 8 hours

Meals included:
• Breakfast
• Lunch
No accommodation included on this day.