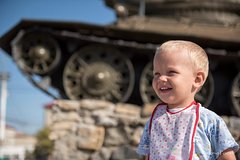 Today I invite you to discover Transnistria. The old USSR is still alive and well in this autonomous region. It is a breakaway territory within the internationally recognized borders of Moldova. The country's national coat of arms still includes the traditional hammer and sickle and the Lenin statue hasn't yet been pulled down. This communist state is called "the last remaining Stalinist dictatorship in Europe".
First stop is at Bender Fortress. In 1713, the fortress, the town, and the neighboring village Varniţa were the site of skirmishes (kalabalik) between Charles XII of Sweden, who had taken refuge there with the Cossack Hetman Ivan Mazepa after his defeat in the Battle of Poltava. After it, we will tour the city of Tiraspol, the capital of Transnistria and drive north up to Dubassary city, along the Dniester River.
You will be amazed about the communist monuments still to be seen on the way and about small towns like Grigoriopol and Dubasari!

Chisinau - starting point
Bender with its Medieval Fortress
City tour of Tiraspol and its highlights (Supreme Council, II World War/Afghanistan War Memorial
Monument-tank, A. Suvorov monument etc. )
Grigoriopol
Dubassary
back to Chisinau
Very important!! In order to enter Transnistria you will have to show a valid passport, and no other document as ID or driver license. No visa is required.