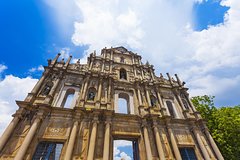 Venture into Macau city for 9 hours with a friendly and professional guide. Visit the enhanced culture and relics of Macao. Explore the A-Ma Temple, a UNESCO World Heritage Site. Built in 1488, its one of the oldest Taoist temples in Macau. Visit the historical corner of Macau, know the history and culture in Museum of Macau and nearby Senado Square.  Capture images of the Street of Rua do Cunhua, which is essentially the symbol of Macau due to its traditional colonial architecture.  Free time in Cotai Strip and Venetian Macao Resort.

Get picked up at your Macau hotel for this 9-hour private tour.

Your tour begins with a trip to the A-Ma Temple, a UNESCO World Heritage Site. Built in 1488, its one of the oldest Taoist temples in Macau.

Go by other popular must-see places such as the 16th-century Ruins of the Church of St. Paul and the old walls at Monte Fort.

The Section of the Old City Walls are the remains of a wall that surrounded the colonial city of Macau, in Portuguese Macau, in the 16th and 17th centuries. The wall's construction is unique because it was built of clay, sand, rice straw, rocks, and oyster shells.

Stop At: Monte Forte (Fortaleza do Monte), Off Estrada do Repouso, Macau China

The fortress was Macau's principal military defense structure which was built in conjunction with the Jesuits form 1617 to 1626. The fortress covers an area of 10,000 square metres and in the shape of a trapezoid. It has become a World Heritage Site in 2005.

Stop to enjoy collections in Museum of Macau, which occupies the foundations and platform with exhibits that illustrate the life of Macau and its people over the past four centuries, emphasizing the bi-cultural character of the city.

St. Dominic's Church is a late 16th-century Baroque-style church that serves within the Cathedral Parish of the Roman Catholic Diocese of Macau. It is located in the peninsular part of the city at the Largo de São Domingos.

The Leal Senado Building was the seat of Portuguese Macau's government. It is located at one end of the Senado Square in São Lourenço, Macau, China. The title was bestowed on Macau's government in 1810 by Portugal's Prince Regent João, who later became King John VI of Portugal.

Senado Square is nearby, and many people like to stay there for hours for shopping or just strolling around. It is an elongated triangular shaped square and connects Largo do São Domingos at one end and Avenida de Almeida Ribeiro on the other.

Inspired by the Las Vegas Strips, Cotai Strip is the fastest growing entertainment district in the recent years funded by Las Vegas Sands. By the end of 2010, the strip will host up to 30 resorts making it the newest vacation paradise. You will visit the Venetian Macau resort, the largest single structure hotel building in Asia. You will have the choice to either trying your luck at the gambling table, shop till you drop at the Grand Canel Shoppes or treat yourself to taste a variety of international cuisine within the resort.

It is about 30 minute walking distance of Venetian Macao. Rua do Cunhua is named after the famous Portuguese explorer Tristão da Cunha. Today Rua do Cunha is essentially the symbol of Macau and attracts tourists far and wide due to its traditional colonial architecture. Apart from the history and culture that surrounds this narrow pedestrian street there is a range of traditional Macanese pastries and snacks that are lined along the street. There is also the famous restaurant "O Santos" Comida Portuguesa which is known as Macaus most authentic Portuguese restaurant.

After your tour, transfer back to your hotel in Macau, or Macau Outer Harbour Ferry Terminal (return ferry to Hong Kong is available to book from local tour supplier at an optional cost).