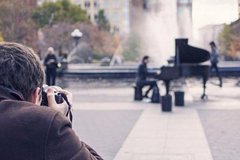 Capture Memorable scenic photographs in the most Instagrammable places of Macau!

The Macau Photography Day Tour strolls through the streets of Macau and along the banks of the pearl delta river taking you through the Historical center of our magnificent city led by one of our professional guides. The three hour, private tour teaches photography skills as well as encourages your creativity and photographic development.

Each tour is crafted to the skills and needs of the participants. Apart from taking photos, you can also expect to learn:

- Portraits and how to get the most out of your flash

The Grand Lisboa is the tallest building in Macau and the most distinctive part of its skyline.

The St. Lawrence's Church, also known as Feng Shun Tang (Church of Smooth-sailing Wind), is one of three oldest churches in Macau. It was first built approximately during 1558 and 1560 in memory of St. Lawrence, who is regarded by Portuguese as a patron saint in navigation. St. Lawrence's Church has been renovated for several times. The present church looks much the same as it was renovated in 1618.

Mandarin's House is a historic residential complex in São Lourenço, Macau. It was the residence and family home of the late Qing theoretician and reformist Zheng Guanying (1842-1921). He completed his masterpiece of Shengshi Weiyan (Words of Warning in Times of Prosperity) in the house. Mandarin's House occupies an area of 4,000 square metres (43,000 sq ft), which is amongst the largest family houses in Macau.

Senado Square (Largo do Senado) is a public square in Macau. It is located in the central area of the Macau Peninsula. Covering an area of 3,700 square meters (4,425 square yards), this is one of the four largest squares in Macau; the others being Praça do Centro Cultural, Praça do Lago Sai Van and Praça do Tap Seac. In 2005 it was inscribed on UNESCO's World Heritage List as it forms part of the Historic Centre of Macau.

The Ruins of St. Paul's (also known as Sam Ba Sing Tzik) stands adjacent to the famous Mount Fortress and Macau Museum. The front façade and the grand stone stairs are the only remains of the greatest church.

St. Anthony's Church is one of three oldest churches of Macau (the other two are St. Lawrence's Church and Church of Saint Lazarus) and also a part of Historic Center of Macau. Often known as Fa Vong Tong (Church of Flowers), the St. Anthonys Church was built by the Society of Jesus to commemorate St. Anthony, Patron Saint of Marriage of Catholics.

Historic wet and open market, still operating in the same location and building since the 1930s in a district also known as the Three Lamps District. This is a view into the deep Chinese past of Macau.

The garden was built in 1906 by local merchant Lou Kau as part of his residence, and its design follows the well-known Suzhou Gardens. It turned over to the Macau government in 1974 as a public park, which is popular with local inhabitants.

Tap Seac Square is the largest public space in Macau. During holiday periods each year, the square is filled with decorations and is the location of many performances.

Jardim do Sao Francisco (or Saint Francisco garden) is located in the heart of Macau. Its a pretty and convenenient spot for a break from the hustle and bustle of the city. It sits just around the back of the Grand Lisboa Casino, between the Portuguese Military Club (possible for non members to go for lunch and a taste of old colonial Macau) and the Cineateatro de Macau (Cinema).