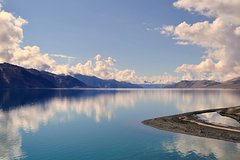 Pass By: Shanti Stupa Road 500 steps from Changspa Road, Leh 194101 India
Arrival Leh in the morning and transfer to the hotel. Full day of rest for acclimatization to the high altitude of Leh (11,500 ft / 3500 mtrs).

Evening visit to Shanti Stupa Sightseeing, After Sightseeing back to the Hotel and Overnight in stay

Pass By: Magnetic Hill, Leh-Kargil-Srinagar national highway, Leh 194101 India
The Magnetic Hill is a near Leh City, and located on the Leh Kargil national highway, about 30 km from Leh, at a height of 14,000 feet above sea level. On its eastern side, flows the Sindhu, which originates in Tibet and goes to Pakistan The hill is located on the Leh-Kargil-Batalik national highway, and is bordered by the Sindhu river. The Indian Army maintains a Sikh Gurudwara near the hill where Guru Nanak Dev, the first of the Ten Gurus of Sikhism, meditated in the 15th century. Due to both the Gurudwara and the gravity hill, the area has become a popular sightseeing destination.

Pass By: Confluence of the Indus and Zanskar Rivers, Leh India
SANGAM - (Confluence of river Zanskar and Indus point) is located at 6KM from Nimo valley towards the Leh city on Kargil , Leh highway. If you are travelling to Leh from Manali, you will have to visit this place from Leh city at the distance of just 35KM

Pass By: Hall of Fame, Leh-Kargil Road, Leh India
Hall of Fame is a museum constructed by the Indian Army in memory of the brave Indian soldiers who laid down their lives defending the motherland in the Indo-Pak wars. The Hall of Fame museum is located on the Leh-Kargil Road, about 4km from the city of Leh. It stands as a reminder of the great sacrifices made by our soldiers to ensure the safety and security of our country.

Pass By: Diskit Gompa (Diskit Monastery), 34°32′28″N 77°33′37″E, Diskit India
Diskit Monastery also known as Deskit Gompa or Diskit Gompa is the oldest and largest Buddhist monastery in the Nubra Valley of Ladakh, northern India. It belongs to the Gelugpa sect of Tibetan Buddhism. It was founded by Changzem Tserab Zangpo, a disciple of Tsong Khapa, founder of Gelugpa, in the 14th century

Pass By: Hunder Sand Dunes, Hunder 194401 India
Hunder is most popular for the camel rides in the high altitude cold desert. The camel safaris are done on Bactrian Double-humped Camels which are reminder the bygone era of Silk Route trade. The vast stretch of sand dunes between Hunder Village and Diskit is where you will see the Bactrian Camels grazing in the sea-buckthorn forests. It is also where most of the safari rides are offere

Pass By: Pangong Tso, Ladakh, Jammu and Kashmir, India; Ladakh, , India;, Leh 194101 India
Pangong Lake is Ladakhs most important tourist attraction. This azure stretch of endorheic lake is situated at a dizzying height of 4350 meter and looks as if it is piece of heaven that fell on earth. Surrounded by barren mountains, this lake is probably one of the most beautiful lakes in Ladakh. Pangong is a transboundary lake that is expanded between India and China for almost 134 kms.

Pass By: Changla Pass, India
The Chang La (also known as Changla) is a high mountain pass at an elevation of 5.360 m (17,590ft) above the sea level, located in Ladakh, in northern Indias Jammu and Kashmir state. Its one of the highest mountain roads of the country.The pass, guarded and maintained by the Indian Army (due its proximity to Chinese border), is covered with snow throughout the year

Thiksey Monastery is a convenient 45min drive from Leh - the main city in Ladakh.

Pass By: Shey Monastery, Indus River, Leh India
Shey Monastery is located at a solitary hillock at a distance of 15 km away south of Leh. This monastery is also called Shey Palace which was once the residence of the royal family which was got constructed by the first king of Ladakh, Lhachen Palgyigon.