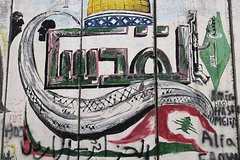 We will visit both Shahabi Citadel in Hasbaya and the Citadel of Independence in Rachaya. 'Em Shratit' is a hidden gem, being unfamiliar to millennial generation. It has the oldest tree in Lebanon that makes wishes come true, as per the myth. We continue to look in on the Beaufort Castle in Arnoun village, stronghold for the crusaders against Salah Eldin. The crucial part of the trip, the Lebanese borders to check out the prominent Fatima Gate from where you can see occupied Palestine.

In 1943, the members of the new Lebanese Government, President Beshara el-Khoury himself, the Speaker of Parliament Adel Osseyran, and ministers Camille Shamoun, Abdel-Hamid Karameh and Selim Takla, were imprisoned in the citadel of Rashaya. The latter quickly disavowed the Commissioners action, so the prisoners left the citadel of Rashaya head high to declare the Independence of the Lebanese Republic on November 22nd. The Citadel of Independence is a tourist site that can be visited while under the army's surveillance. The entrance price is very minimal.

A good deal of this history transpired at the huge citadel that is today Hasbayas chief claim to fame. Owned by the Chehab emirs, the citadel forms the major part of a Chehabi compound  a group of buildings surrounding an unpaved central square 150 meters long and 100 meters wide. Several medieval houses and a mosque make up the rest of the compound, which covers a total of 20,000 square meters.

Stronghold for the crusaders against Salah Eldin

Finally, the borders to check out the prominent Fatima Gate from where you can see occupied Palestine.