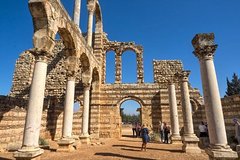 Visit three history-filled landmarks in the Beqaa Valley on one full-day trip.

Explore the spectacular Roman temples among the ruins of Baalbek.

Located in the north of the Beqaa valley, Baalbek, also known as Heliopolis of the Romans & the city of the Sun, is one of the must see archaeological sites in Lebanon. Three particularly interesting temples stand out: the temple of Bacchus, in an astonishing state of preservation, the temple of Jupiter, whose vestiges reveal impressive dimensions, and the temple of Venus, Venus which is characterized by the originality of its circular plan as well as by the harmony of its forms. These temples allow Baalbek to be on the UNESCO World Heritage List, making it a must-see tourist attraction in Lebanon.

The city of Anjar is located in the plain of Bekaa, halfway between Beirut and Damascus. Unlike the other historical sites of Lebanon, Anjar is the only representative site of the Ummayade period, it is therefore a relatively young site. The construction of Anjar by Walid I dates from 705 to 715 and remains very numerous vestiges in excellent state of conservation such as the walls by which the city

is surrounded. Located at the intersection of two important roads: the one leading from Beirut to the one crossing the Bekaa leading to Baalbek, Anjar was an example of an inland trading centre. Not to be missed: the remains of the mosque, the grand palace, the baths, the small palace.

Lebanons most famous wine producer, Ksara was founded in 1857 by Jesuit priests. It is Lebanons oldest and largest winery. Its iconic caves are a truly remarkable subterranean structure dating back to Roman times. These mile-and-a-half-long caves were used as cellars as they provided the ideal temperature and humidity levels to store the wines.

When visiting Ksara winery, you will join a 10 minutes documentary explanation about Ksara, then a visit to the caves before doing some wine tasting.

Baalbek is an ancient Phoenician city located in what is now modern-day Lebanon, north of Beirut, in the Beqaa Valley. Inhabited as early as 9000 BCE, Baalbek grew into an important pilgrimage site in the ancient world for the worship of the Phoenician sky-god Baal and his consort Astarte, the Queen of Heaven (the name `Baalbek' means Lord Baal of the Beqaa Valley). The centre of the city was a grand temple dedicated to Astarte and Baal and the ruins of this early temple remain today beneath the later Roman Temple of Jupiter Baal. Baalbek is listed by UNESCO as a World Heritage Site.