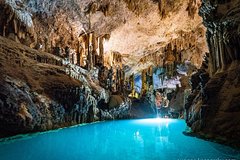 Join our small group tour to Jeita Grotto, Harissa and Byblos.
Explore the beauty of jeita grotto the natural reserve, visit Harissa Our Lady of Lebanon and stroll Byblos old souk and discover the Crusader castle

Jeita Grotto is a natural wonder formed over thousands of years. It is made up of two interconnected caves with karstic limestone walls that spread over an area of nine kilometres.

The grotto is split into two parts; the upper with a breathtaking view of extraordinary stone that forms curtains, columns, draperies and mushrooms at a distance of some 750m explored for 2200m, and the latter of 400m explored for almost 7800m, where you can marvel at the majestic forms of otherworldly concretions. A boat ride is offered at the lower grotto.

Stop At: The Shrine of Our Lady of Lebanon, Keserwan, Harissa Lebanon

Harissa is a mountain village in Lebanon. The village, which is located 650 meters above sea level, is home to an important Lebanese pilgrimage site, Our Lady of Lebanon. The village is located 20 km north of Beirut, and accessible from the coastal city of Jounieh either by road or by a nine-minute journey by a gondola lift, known as the "Téléférique". It attracts both pilgrims and tourists who want to enjoy views of the bay of Jounieh.

The pilgrimage site is a huge 15-ton bronze (and painted white) statue of Virgin Mary, known as Our Lady of Lebanon, with her arms outstretched. The statue was made at the end of the 19th century and inaugurated in 1908. Inside the statue's base there is a small chapel. A huge modernistic Maronite cathedral built of concrete and glass stands right beside the statue.

The castle was built by the Crusaders in the 12th century from indigenous limestone and the remains of Roman structures. The finished structure was surrounded by a moat. It belonged to the Genoese Embriaco family, whose members were the Lords of Gibelet. Saladin captured the town and castle in 1188 and partially dismantled the walls in 1190. Later, the Crusaders recaptured Byblos and rebuilt the fortifications of the castle in 1197. In 1369, the castle had to fend off an attack from Cypriot vessels from Famagusta.

The Byblos Castle has distinguished historical buildings for neighbors. Nearby stand a few Egyptian temples, the Phoenician royal necropolis and the Roman amphitheatre.