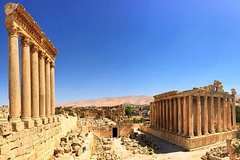 The tour starts with the visit of Baalbeck 80 Km away from Beirut the temples of Jupiter, Bacchus and Venus followed by the visit of Anjar, the old city built by the Omayyads and ends in Ksara for a Wine tasting experience and a visit to the caves.

Explore the fascinating city of Baalbeck and marvel the well preserved historical remains such as the temple of Bacchus, Jupiter and Venus. Its monuments make up the largest and best-preserved corpus of Roman architecture left around.

Discover Anjar, the Umayyad site in Lebanon, located near the Litani River and 58 km from the capital of Beirut. Anjar was founded during the Umayyad period under Caliph Walid ibn 'Abd al-Malak (r. 705-715 CE) and takes its name from the Arabic term ayn al-jaar, meaning water from the rock - a reference to the streams that flow from adjacent Lebanon and the anti-Lebanon mountain range.

While, in Ksara caves, taste the oldest and most famous Wineries in Lebanon. Ksara is located in the Bekaa Valley where a natural water table and clay-calcareous soils respectively offer appropriate climates for wine production.