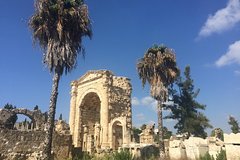 Explore in a full private day with the best saving price for this private tour ticket, the archaeological site of Sidon, Maghdoucheh & Tyre you will avoid the rush & eliminates the awkwardness of sharing a tour bus which give you more time to sight see. Moreover, you are free to create a customized itinerary keeping in mind the tour schedule. You will explore the highlights like the Crusaders sea castle, Sidon old souk, Soap Museum, the great Al-Omari Mosque, Our Lady of Awaiting, Cave, Roman Hippodrome and more.

From your hotel in Beirut, with smile you are picked up in the morning at 8:30am for a private day tour.

Travelers will explore the ancient Phoenician city of Sidon which it has been of great religious, political and commercial value to the region, it is said to be inhabited since 4000 B.C. During the 13th century, the Crusaders built Sidon's Sea Castle as a fortress on a small island connected to the mainland by a narrow 80m long roadway. The island was formerly the site of a temple to Melqart, the Phoenician version of Heracles.

After Sidon Sea Castle you will head to the old souk which is exactly what you might imagine as an Arabian bazaar to look like, you will find the butchers, bakeries, cobblers & old-fashioned blacksmiths. This marketplace is made of stone archways and wedged into each niche is a different shop selling everything from vegetables, spices, fruits to souvenirs to meats. Every turn you make it reveals a new corner of the souk, where colors, smells and sounds blend to make it an enchanting marketplace, feel half the fun by labyrinth of twisting alleyways.

This informative and large old Soap Museum is specialized in the art of saponification, they will let you know how the soap is made with the chemical process that produces the soaps we use every day, for around 3$, a guide will take you through the aromatic chambers of the museum where olive-oil based soaps were made to service the many hammams in Sidon. At the exit, you will find a beautiful well-stocked gift store waiting you.

Travelers will explore the Riwaq, entrance and the internal beauty of Al-Omari Grand Mosque which was built in the 12th century, it is said that was originally the old church of Saint John the Baptist, built in 1150 over the site of Roman imperial baths. This small and originally Byzantine church was converted into a mosque in 635 and named Al-Omari Mosque in the name of Caliph Omar Ibn Al-Khattab, it was renamed the Cathedral of St John under the Crusaders in 1115. Then in 1291, the Mamluks captured Beirut and converted the church into a mosque.

Travelers will explore the khan el Franj which was built by Fakhreddine II for merchants and goods. This is a typical khan with a large rectangular courtyard and a central fountain surrounded by covered galleries. The center of economic activity for Sidon city in the 19th century, the terrace affords a clear view of the harbor and the Sea Castle. Today it is being renovated to serve as Sidons cultural center.

Stop At: Our Lady of Mantara, Maghdoucheh Lebanon

After khan al Franj, we will head to the village of Maghdoucheh, the travellers will visit our lady of Awaiting which is a Melkite Greek Catholic Marian shrine and a cave, it was discovered on 1721, the travellers will walk through the shrine which is consists of a tower crowned with the statue of the Virgin and Child, a cathedral, a cemetery and a sacred cave believed to be the one where the Virgin Mary rested while she waited for Jesus.

Then we will head to Tyre which was founded around 2750 BC according to Herodotus and the birthplace of Eurpa and the founder of Carthage "Dido", the travellers will see its old harbour, colourful streets and the beach from to side of the city.

Then we will head to the Unesco World Heritage Site in the city of Tyre dating back to the II century C.E. It is considered to be one of the largest and best preserved Roman hippodromes of its type in the roman world, travelers will walk thru, which is around 480 meter long and 90 meter wide horseshoe shaped structure seated twenty thousand spectators who gathered to watch the death-defying sport of chariot racing.

After the fabulous site of Hippodrome, we will head to the second UNESCO World Heritage site of Tyre necropolis, it is constituting the principal entrance of the town in antique times, travelers will walk thru hundreds of stone and marble sarcophagi from the Roman and Byzantine eras, visitors will see the decorated stones with frescoes and bas-reliefs of works from Homer and others and the Triumphal Arch which is one of the most impressive relics of the site. After this visit Travelers will have the choice to have there lunch in one of a traditional restaurant or a local street food of Falafel. Your private full day tour ends with return to your hotel.

Travelers will be Drop off to there Hotel in Beirut