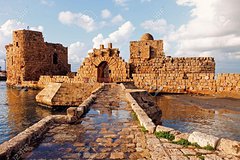 Many tourists prefer to visit the touristic landscapes and sites of the country by comfortable cars and not by coaches and busses as they feel free to organize their trip itinerary and make it flexible based on their desires and wishes and to be restricted within otherstour itinerary as for time to be spent in the touristic site or as for the food dishes the are to have in certain restaurants reserved in advance . Accordingly , we highly consider the needs of our guests and tourists to make them fully satisfied

Sidon, known locally as Sayda or Saida (Arabic: صيدا‎), is the third-largest city in Lebanon. It is located in the South Governorate, of which it is the capital, on the Mediterranean coast. Tyre to the south and Lebanese capital Beirut to the north are both about 40 kilometres (25 miles) away.

The best things to see and do in Sidon

Located on the southern coast of Lebanon, 83 km south of Beirut, the antique town of Tyre was the great Phoenician city that reigned over the seas and founded prosperous colonies such as Cadiz and Carthage

Tyre is an ancient Phoenician city. Today it is the fourth largest city in Lebanon after Beirut, Tripoli and Sidon.The city has a number of ancient sites, including its Roman Hippodrome which was added to UNESCO's list of World Heritage Sites in 1979.
Tyre was founded around 2750 BC according to Herodotus and was originally built as a walled city upon the Mainland.
The city of Tyre was particularly known for the production of a rare and extraordinarily expensive sort of purple dye, produced from the murex shellfish, known as Tyrian purple.
There is the famous "Arch of Hadrian" and one of the best hippodromes in the region were constructed during the Roman empire.
The background of the ancient city and the Roman Hippodrome shows how badly the site is managed where modern buildings and poor houses surrounds the site.
There is an entrance of 2.3$ per person. It takes 20 mn to visit quickly the whole site including the Arche and the Hippodrome.

Tyre is also  a must see for its pretty harbour, sandy beach, and the pleasant old quarter of the city

Enjoy swimming in the sea of Tyre . It has a pretty sandy beach