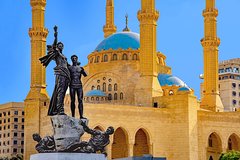 This tour follows an itinerary that for 15 years, while the civil war raged in Lebanon, was impossible to do. For 15 years, Beirut was a divided city. One half was Christian and the other was Muslim. There were few crossings between the two sides and many were under the control of snipers. This walk resurrects the story of the war and the areas most affected by it in Beirut.

Beirut is over 5000 years old so anywhere you dig, you will find something historically significant. Along this route you will get an idea of what the city was like a hundred years ago while seeing the damage caused by the civil war. You will also get to know some historical and not so historical landmarks, such as Martyr's Square, the Egg, Beit Beirut and Falafel Sahyoun.

Martyr's Square is regarded as one of Beiruts many scars but this square used to be the city's main transport, social and commercial hub. After 15 years of civil strife and despite reconstruction efforts, the square is still is Beirut's bleeding heart.

The Mohammad al-Amin Mosque was built with stone brought in from Saudi Arabia and was first opened in 2008. The minarets are based on those of Mecca's Grand Mosque and the dome is inspired by Ottoman mosques, which were in turn influenced by Istanbul's Byzantine-era Hagia Sophia.

MIM showcases 1480 wonders of the mineral world, in a dazzling multitude of shapes and colours. The museum houses the collection of Sélim Edde in a magnificent underground custom-made space and was opened to the public in 2013.