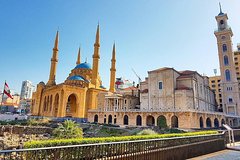 Be enchanted by the capital of modern Lebanon, the countrys cultural and commercial center. On your half-day guided tour of Beirut, see the citys top attractions while discovering how Beirut was built on a rocky headland, and has risen and fallen over the centuries. See the Martyrs Statue, the Nejmeh Square in downtown Beirut and the Beirut National Museum. With your guide, you'll step back to the time of 15 BC, when Beirut was a significant port and cultural center.

Your Beirut historical walking tour starts in downtown Beirut, where you will see the recently renovated Nejmeh Square, with its famous clock tower that was built during World War I.

Your guide will give you a brief introduction to this fascinating citys turbulent history and provide a glimpse of Beiruts true character. The liberalism associated with Beirut has been maintained even during periods of near complete destruction. With the break-up of the Ottoman Empire at the end of the WWI, the city became the capital of modern Lebanon. Today Beiruts long and complex history is being revealed at new archeological sites in the city.

Please note: Though the US Department of State has issued a warning against travel to Lebanon due to safety and security concerns, Viators Lebanon tours continue to operate with no disruptions. We are in frequent contact with our local suppliers and guides in Lebanon, and they report that all tours are operating as scheduled. Should the situation change, we will update this information and customers will be notified of alterations or cancellations to tours.