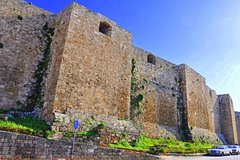 Skip the city and head in a private car and an English speaking driver toward the north of the country to explore Tripoli's main attractions. Being on the coast of the Mediterranean, Tripoli was a cornerstone for civilizations. Phoenicians, Romans and Byzantines are only the beginning of the citys rich cultural history. Guests will visit the crusader fortress, the Citadel of Raymond de Saint-Gilles, which is a site among many. Two old world Mosques, Al Mansouri and Taynal mosques, Hammams and markets which date back to the Ottoman Empire, lunch is served before continuing our way to Al Mina, this small treasure, one of the citys most prized places.

Pick up location from your hotel in Beirut, board in a private comfortable car with an English speaking driver and head to Tripoli, the largest city in northern Lebanon, explore the main attractions in this city, starting by the Citadel of Raymond de St Gilles, built on a hilltop by Raymond de St Gilles governor of Tripoli, in 1103. Guests will explore the walls, ramps and terrace of the Citadel and get to know the history of this castle.

Guests will also visit Al Mina which means the harbour, it is a coastal independent town in Tripoli, Northern Lebanon. El-Mina occupies the location of the old Phoenician city of Tripoli. It acts as the harbour city for modern neighbouring Tripoli, Lebanon's second-largest city, situated 5 km to the east.

Also, travellers will explore the Hammams, the old souk consisting of many caravansaries such as Khan Al Khayyatin.

After having lunch, guests will visit the Taynal mosque. It is considered as one of the most important monuments in Tripoli. Standing in the middle of an orchard and visible from all sides, it's an oblong structure of sandstone. Its peculiarities reflecting the remnants of a Crusader church built by the Carmelite Fathers at the time of the Crusades.

Guests will also explore the Al Mansouri mosque, dated back to the Mamluk period, the mosque has many entrance sides and is characterized by beautiful architectural designs and arcades. Ending our tour here, guests will return back to their hotel in Beirut.