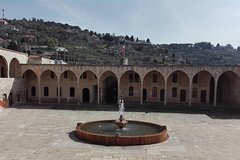 Explore the main landmarks in Lebanon on a full-day tour from Beirut to Beiteddine, Deir el Qamar and Chouf Cedars.

Discover Beiteddine Palace, a masterpiece of the early 19th-century architecture built by Emir Bechir Chehab II around a small Muslim-Druze hermitage. Visit Deir el Qamar, that was the capital of Mount Lebanon from the 16th to 18th century and a regional stronghold for the Ottoman Emirs. Walk the Chouf cedars nature reserve and enjoy the view of the cedars trees of Lebanon.

Shouf Biosphere
The largest of Lebanon nature reserves, Al-Shouf Cedar Nature Reserve stretches from Dahr Al-Baidar in the north to Niha Mountain in the south

Beit ed-Dine (Arabic: بيت الدين‎), also known as Btaddine (Arabic: بتدين‎) is a small town and the administrative capital of the Chouf District in the Mount Lebanon Governorate in Lebanon. The town is located 45 kilometers southeast of Beirut,[1] and near the town of Deir el-Qamar from which it is separated by a steep valley. Its average elevation is 860 meters above sea level.

Deir al-Qamar (Arabic: دير القمر‎), meaning "Monastery of the Moon" is a village south-east of Beirut in south-central Lebanon. It is located five kilometres outside of Beiteddine in the Chouf District of the Mount Lebanon Governorate at 800 m of average altitude