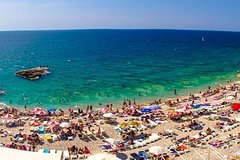 Experience Lebanon's most beautiful attractions discover Batroun the sea city and Tripoli the multicultural city with an English Speaking Driver in a modern private car.

Discover the north of Lebanon. Visit the beautiful Batroun village famous for its crystal clear water, explore the Phoenician sea wall which was originally a natural structure composed of petrified sand dunes. It was reinforced gradually by the Phoenicians with rocks, and the wall as it stands today took its present shape in the first century BC. The Phoenicians used this wall as protection against sea storms and invaders, while during Roman times it again functioned as a quarry. Continue to Tripoli the largest city in northern Lebanon, the city with a mixed culture. Stroll down the two mosques, the hammams, explore the Citadel St Gilles, walk in the old souks, always accompanied by an English speaking driver in a modern car.