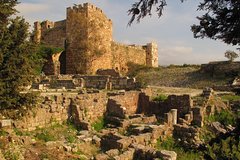 A visit to the upper caves of Jeita Grotto and a cruise in a rowing boat in the lower water basin and a guided walking tour in Byblos visiting the main landmarks of Medieval Byblos.

Discover one of the most fascinating grotto's in the world with splendid and stunning rock formations and filled with beautiful stalactites and stalagmites, after which you will enjoy a home made lunch box. With a satisfied belly, continue your day with a 2 hour guided walking tour through the main landmarks of charming and Medieval Byblos, including the famous archaeological site with Crusaders Castle.

Visit one of the Middle East's greatest natural wonders, the stunning Jeita Grotto cave system extends around 6km into the mountains 18km, northeast of Beirut.

Discover Byblos, known locally as Jbeil and in the County of Tripoli as Gibelet, is the largest city in the Mount Lebanon Governorate of Lebanon. It is believed to have been first occupied between 8800 and 7000 BC and continuously inhabited since 5000 BC, making it one of the oldest continuously inhabited cities in the world.

You will have a guided tour inside the old town of Byblos, and see:

Learn about Byblos Castle, a castle in Byblos, Lebanon. It was built by the Crusaders in the 12th century from indigenous limestone and the remains of Roman structures.