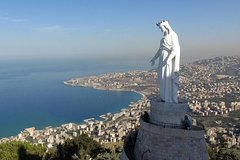 Explore the fascinating Lebanese cities of Byblos and Harissa, as well as the world-famous Jeita Grotto, on a full-day trip from Beirut! On this must-do guided tour for any traveler to Lebanon, you'll visit Byblos, one of the oldest cities in the world, and see the impressive Jeita Grotto, one of the most stunning natural wonders on Earth. Discover the rise and fall of nearly two dozen successive civilizations, marvel at the Statue of the Virgin Mary in Harissa and explore one of the richest archeological areas in the country, all in one amazing day!

Meet your friendly, professional guide in central Beirut, and then head straight to Jeita, which is 12 miles (20 km) north of Beirut. The fascinating town is home to one of the world's most beautiful caverns, known as the Jeita Grotto, which was a finalist in the New7Wonders of Nature, a 2011 competition for the best natural wonders on the planet. Visit the lower caverns by boat on a subterranean lake, and then see the dry upper gallery on foot with your guide. The main source of the Dog River (Nahr El Kalb) rises from this incredible cavern.

Your comfortable coach will then take you to the ancient city of Byblos, one of the oldest towns in the world, dating back at least 7,000 years. The rise and fall of nearly two dozen successive civilizations make this site one of the richest archeological areas in the country. Today a busy modern town, Byblos is home to a medieval Roman port, which is one of the citys tourist hubs. Your guide will tell about the landmarks in this area such as Byblos Castle, built by the crusaders in the 12th century. Youll also learn about the extensive remains of citys past.

After a relaxing lunch of traditional meze and tapas at a Lebanese restaurant in Byblos (included), head off to Harissa. This beautiful village boasts stunning, panoramic views across the Bay of Jounieh on the Mediterranean coast. Admire the Statue of the Virgin Mary, which can be seen from miles away, and visit inside the statue's base  a chapel with an exterior spiral staircase. This sanctuary is a destination for countless pilgrims who come from all over. After a photo opportunity at this major Lebanon attraction, return to Beirut in the relaxing comfort of your luxury coach.

Please note: Though the US Department of State has issued a warning against travel to Lebanon due to safety and security concerns, Viators Lebanon tours continue to operate with no disruptions. We are in frequent contact with our local suppliers and guides in Lebanon, and they report that all tours are operating as scheduled. Should the situation change, we will update this information and customers will be notified of alterations or cancellations to tours.