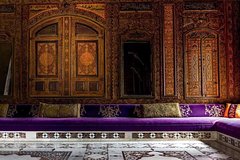 Built over 300 years beginning in 1788, the palace was the personal home of Emir Bashir Shihab II who wanted the mansion to be a place of singular beauty and legendary opulence. The castle was built on a hermitage called Beiteddine and featured all manner of amenity including a lush personal apartment for the Emir, a harem, and a rich guest house that was often offered to passing luminaries and dignitaries. Many of the surfaces were inlaid with intricate mosaics and designs, many of which have survived remarkably well to this day. Unfortunately, all of this grandeur is said to have come at a great price. While it is likely a false story, its been said that the emir ordered that the architect of his palace have his hands cut right off so that the Beittedin Palace could not be duplicated. In addition, he is said to have conscripted all of his healthy male subjects to work on the project for days at a time for no pay. Despite the possible labour tragedies associated with it, the palace was eventually taken over by the Ottomans and used as a government building before eventually being turned into a protected historic site. Today the palace still retains its stunning architecture and hand-made mosaics and is an important site for both visitors and the people of Lebanon.

Al Shouf Cedar Nature Reserve is a nature reserve in the Chouf District of Lebanon. It is located on the slopes of Barouk mountain and has an area of 550 km2 (210 sq mi), nearly 5.3% of the Lebanese territory. The reserve contains the Lebanon cedar forests of Barouk, Maaser el Shouf and Ain Zhalta-Bmohray. It is an Important Bird Area (IBA) and Eco-tourism area. It hosts 32 species of wild mammals, 200 species of birds, and 500 species of plants.