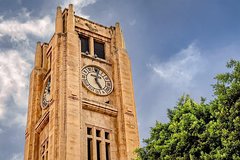 Discover the hidden gems in Lebanon with fascinating ancient cities and tourist places guided by local tour guides & fully equipped cars. You can count on us!

Begin your 3-hour walking tour with a pickup from your hotel.

As a prelude to the sights, hear a fascinating introduction to Beiruts history from your guide. Learn how it was originally settled more than 5,000 years ago, and prospered as a Roman city-state from 15 BC. Discover how, with the collapse of the Ottoman Empire after World War I, the city became the capital of modern Lebanon, and has retained its liberal atmosphere despite long periods of near-destruction.

Set out through the bustling downtown streets, and visit several top Beirut attractions and landmarks. Each sight comes with a story, so follow your guide and learn about the people and events that shaped them.

Visit recently renovated Nejmeh Square, the heart of the modern city, and see famous central clock tower, constructed during WWI.Gaze at the impressive Martyrs Statue in Martyrs Square, a monument that honors the Lebanese nationalists murdered during the same war by the Ottomans, and see other monuments and sights that provide a window into Beiruts past, culture and character.

Next, visit the National Museum of Beirut, the home of vast collections of archaeological artifacts. Stroll around to view the highlights displayed in its galleries, such as prized Phoenician statues, Byzantine mosaics and Roman pieces, and gain a fascinating overview of the citys and Lebanons wider history.

Your tour then finishes back at the original start point. Please note: Though the US Department of State has issued a warning against travel to Lebanon due to safety and security concerns, PHOENIX TOURS continue to operate with no disruptions. We are in frequent contact with our local suppliers and guides in Lebanon, and they report that all tours are operating as scheduled. Should the situation change, we will update this information and customers will be notified of alterations or cancellations to tours.