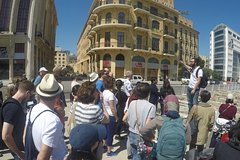 You will see Beirut the way we see it: clustered, multi-layered, amazingly rich and seriously crazy! We will go from East to West, passing by the main landmarks but also adding some less visited neighborhoods like Zokak El Blat and Bashoura. And be ready for some yummy street food and some beers!

The statue, the remains of "Le Petit Serail", Ciné Opéra

Intro about the civil war and the post 2005 assassinations

The Yacht Club of Beirut

We will talk about the Saint Georges/SOLIDERE real estate battle

The old Holiday Inn building, we will talk about the civil war at the Qantari front, the battle of the hotels in 1975

We will enter the Zokak El Blat district, talk about the 19th century Beirut and grab some Lahmadjun (dough with minced meat, vegetarian option available)

we will pass by the BDD to reach the Green line, the separation line between Christians and Muslims during the civil war

The former Metropol Cinema that was transformed into a bunker during the civil war. We won't go in, but we will stop and talk about the phases of the civil war

we will walk along Gouraud street back to Martyrs Square