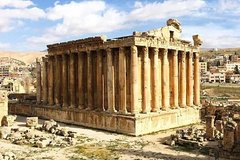 This Phoenician city, where a triad of deities was worshipped, was known as Heliopolis during the Hellenistic period. It retained its religious function during Roman times, when the sanctuary of the Heliopolitan Jupiter attracted thousands of pilgrims. Baalbek, with its colossal structures, is one of the finest examples of Imperial Roman architecture at its apogee.

The Baalbek Temples are famous for their exquisitely detailed yet monumentally scaled ruins of the Roman period, when the city Baalbek, then known as Heliopolis, was one of the largest sanctuaries in the empire. It is Lebanon's greatest Roman treasure, and it can be counted among the wonders of the ancient world, containing some of the largest and best-preserved Roman ruins. The town is about 85 km (53 mi) northeast of Beirut and about 75 km (47 mi) north of Damascus. It has a population of approximately 72,000.

Lebanons most famous wine producer, Ksara was founded in 1857 by Jesuit priests. It is Lebanons oldest and largest winery and the third most visited tourist attraction. When the winery was founded, Lebanon was under Islamic Ottoman rule; the Ottoman masters in Istanbul allowed the production of wine as long as it was used for religious purposes. Lebanons first red wine was created in the monastery and Ksaras wine making tradition began. Of course, one cannot describe Ksara without mentioning its iconic caves, a truly remarkable subterranean structure dating back to Roman times (most probably built at the same period as the temple of Bacchus in Baalbek nearby). These mile-and-a-half-long caves were used as cellars as they provided the ideal temperature and humidity levels to store the wines