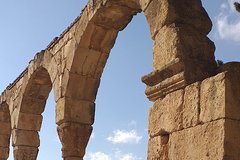 With the best saving price for this private tour ticket, youll spend a day exploring the archaeological site of Anjar & the Baalbek temples, you will avoid the rush & eliminates the awkwardness of sharing a tour bus which give you more time to sightsee. Moreover, you are free to create a customized itinerary keeping in mind the tour schedule. Additionally, you will get a FREE AIRPORT DEPARTURE TICKET. This is only for TripAdvisor & Viator customer and not for the cash customer.

See highlights like the archaeological street, great palace, mosque, medieval baths, and church of Anjar site & you will explore in baalbeck the temple of Bacchus, roman ruins, stone of the pregnant woman and more.

From the hotel in Beirut, with smile you are picked up in the morning at 8:30am for a private day tour.

Travelers will explore the Bekaa valley which is the lebanese most important farming region, they will see the green fields on both sides of the way to Baalbek, the valley is situated between mount lebanon to the west and anti lebanon mountains to the east, it is 120 kilometers long and 16 kilometers wide on average.

Travelers will explore the Umayyad city of Anjar which was founded in the beginning of the 8th century, the site occupied a vital location during the period of antique and medieval Bekaa, it was constructed in a grid layout measures 374 m by 308 m wide, this archaeological site includes 14 points to visit such as the shops, streets, great palace, mosque, small palace, medieval baths, church and so more to see.

Travelers will explore the large archaeological temple of Bacchus, it is considered as an outstanding archaeological and artistic site of imperial roman architecture and was inscribed as an Unesco World Heritage, it is one of the best preserved and grandest roman temple in the world.

Travelers will explore the spectacular most preserved roman ruins on the world, the gigantic pillars and huge magnificent stones will take you deep in history how it all was built.

Travelers will explore the stone of the Pregnant Woman together with another ancient stone block nearby, it is among the largest monoliths ever quarried, the third monolith estimated weight around 1650 t, making it the largest stone ever carved by human hands.

Travelers will walk and explore the old souk of Baalbeck, they can buy there souvenirs and enjoy the traditional shops.

Travelers will pass near the great mosque of baalbek, it has a holy shrine of Sayida Khawla daughter of imam Hussein the grandson of Prophet Muhammad, it is includes a tree that is around 1400 years old.

Travelers will have lunch in this restaurant, they have a wide range to choose from the menu which include a traditional food, fresh meat, chicken, vegetarian and snack.

Your private full day tour ends with return to your hotel.

Don't forget your FREE airport departure ticket, you have 10 days to use it after the tour date.