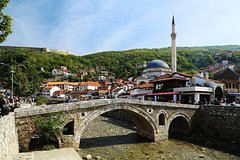 Prizren, in Kosovo, is a charming city of mosques and monasteries dating back to the 14th century. Happily spared (mostly) from both the "destroy the old, build the new" drive of the communists during the early years of their rule in Yugoslavia, as well as the ethnic and religious atrocities that plagued the Western Balkans in the last decade of the 20th century, Prizren has the best-preserved old town in the country so far, and is often referred to as the cultural capital of Kosovo.

08.00, our professional guide will pick you up at your hotel in Tirana and then we will drive to Prizren, through a beautiful valley and mountainous terrain.

For the construction of the bridge there is not any evidence yet, but based on its typology it could be stated that it should have been built by the end of the 15th century. The Old Bridge consists of three arches, where the middle arch is the largest, whereas the side arches are smaller and are not the same that makes the bridge asymmetric.

During the adjustment of the Remzi Ademi road in the 1950s, the bridge changes in its appearance as the right- arch (north side) gets closed to expand the road.
Although with a deformable view, the bridge has committed itself until 17.11.1979 where waters flood the city of Prizren, where the bridge falls apart completely.

Since the bridge had a special significance for Prizren and residents were emotionally related with it, they decided to make a reconstruction. So they started with the analysis and drafting of projects documentation. The Bridge rebuilt again where the cornerstone was laid on the 5th of June 1982, while the inauguration was done on the 17th of November 1982. Besides the bridge there was built place called keji on the right side of the river.

Sofi Sinan Pasha[4] started construction of the mosque in either 1600 or 1608.[2] Sofi Sinan Pasha, a former beylerbey and kaymakam in Bosnia should not be confused with grand vizier Sinan Pasha, who built the Sinan Pasha Mosque in the nearby city of Kačanik.[4]

It is widely considered that the stones used to build the mosque were taken from nearby Saint Archangels Monastery, a Serbian Orthodox monastery founded by Serbian Emperor Stefan Duan.In fact, parts of the former monastery can be seen in the mosque. The monastery, which was abandoned after the arrival of the Ottomans in the 16th century, had fallen to ruins by the 17th century. Hasan Kaleshi, an Albanian historian, sustained in 1972 that Sofi Sinan Pasha couldn't have possibly ordered any monastery destruction as this was impossible without a Sultan decree, rather, he ordered the use of the spare stones to a better deed as ordered by the Sultan.