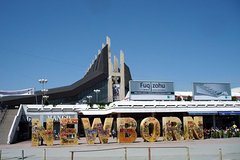 Pristina is the cultural, economical, and administrative center of the Kosovo with a long history. In a full day tour to Pristina, you can discover archeological sites, monuments protected by UNESCO, very old Ottoman places, narrow stone streets and attractive tall buildings. The 'New Born' monument is becoming the symbol of this new state.

After breakfast we take a drive just outside of Pristina to visit the Battle of Kosovo monument dedicated to the battle of 1389 between a Balkan Alliance force led by Serbian prince Lazar against an Ottoman army led by Sultan Murad I. The battle was fierce and both leaders of the armies were killed in the battle. Then continue further to visit the monument as well as the Tomb of Sulltan Murad. At Gracanica, a few kilometers from Prishtina, we visit a superb Orthodox Church founded by the Serbian king Stefan Milutin in 1321, a triumph of Byzantine architecture and part of the Kosovo Medieval Monuments protected by UNESCO. Close by, the ancient remains of Ulpiana, a Roman town in the province of Dardania home, also known as Justiniana Secunda, have been unearthed, testimony to Kosovos ancient past.

After visits return to Pristina where we will walk through the capital exploring its main attractions including the Mother Teresa Square, the Monument of Scanderbeg (Albanian National Hero), the clock tower, Kosovo Government building and the 'New Born' monument which is becoming the symbol of this new state. Of particular interest are the Ottoman period mosques of Prishtina with probably the most beautiful, being the Fatih Mosque dating back to 1461 during the golden era of Sultan Mehmet II. Its huge ceiling domed cupola crowns a splendidly painted floral interior of Arabesque design. Nearby is Pristina's oldest building, the Çarshia Mosque completed in 1389. We end our tour with a visit to the Ethnographic Museum situated in a typical Ottoman architecture house, beautifully stocked with original artefacts which testify to the traditions and way of living of the people in Kosovo.