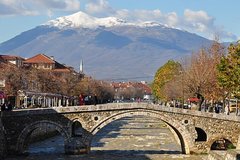 This is a concentrated tour of the major monuments of Kosovo, giving visitors a full picture of what this new country has on offer.

You will be welcomed at Skopje Airport in Macedonia, and transferred to Prizren, one of the most beautiful towns in Kosovo for the overnight stay. You will be driven through some beautiful natural areas which are a great introduction to Kosovos natural landscape.

Prizren is the second largest city in the country and is a beautiful city situated on the slopes of the Sharr Mountains. Prizren offers some great religious monuments representing different faiths, with possibly the 14th century Orthodox Church of 'Our Lady of Ljevis' being the most important, becoming part of the UNESCO list. After these visits, proceed to Gjakova which has a Grand Bazaar thought to be the oldest in Kosovo also known as Ҫarshi, full of old houses and shops, a Turkish Bathhouse or Hamam and the 16th century Hadum Aga Mosque.

The Monastery complex of Decani is considered the largest Medieval church in the Balkans and contains the most extensive beautifully preserved fresco decorations, protected by UNESCO. Continue to visit the Patriarchate of Peja constructed in the XIII century. It is composed of three small churches with beautiful frescoes. Gracanica a few kilometres from Pristina, houses a superb 14th century Orthodox Church founded by the Serbian king Stefan Milutin in 1321, considered a triumph of Byzantine architecture. Finally, close by, visit ancient remains of Ulpiana, a Roman town in the province of Dardania also known as Justiniana Secunda, confirming Kosovos ancient past.

Today, walk through Pristina, exploring its main attractions in the centre and surroundings including: the Mother Teresa Boulevard, the Monument of Scanderbeg (Albanian National Hero), the clock tower, Kosovo Government building and the New Born monument which is becoming the symbol of this new state. Of particular interest are the Ottoman period mosques of Pristina with probably the most beautiful, being the Fatih Mosque dating back to 1461 during the golden era of Sultan Mehmet II. The Ethnographic Museum situated in a typical Ottoman architecture house is beautifully stocked with original artefacts. Outside Pristina we visit the 'Battle of Kosovo' monument. The battle was fierce and both leaders of the armies were killed in the battle. In fact, immediately after, visit the grave or Turbe of Sultan Murad I which is situated only a few kilometers away.

After an early breakfast, be driven to Skopje International Airport in the capital city of nearby Macedonia.