Tour of the Jerusalem Archaeological Park by the Western Wall 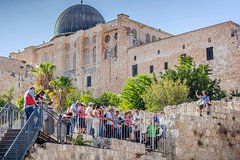 Tour of the Jerusalem Archaeological Park by the Western Wall

A captivating guided tour of archaeological remains right outside the Temple Mount. Ascend to Hulda's Gates at the Southern Wall of the Temple Mount which pilgrims used to enter the Temple Mount during the Second Temple period.  Walk along the lesser known area of the Western Wall and behold massive boulders, remnants of the destruction of Jerusalem in 70 AD. Tour the remains of the magnificent Umayyad Palace and get an in-depth understanding of the area's history through virtual reconstruction and visual exhibitions in the Davidson Center, built inside an ancient palace.

The Umayyad Palace - a tour through the remains of a magnificent palace of a Muslim caliph.

The Triple Gate - the original staircase and the three blocked gates that led the Jews to the Temple Mount during the Second Temple period.

Robinson's Arch - the main market street of Jerusalem during the Second Temple period, on which the huge stones that formed the bridge to the Temple Mount during Herod's reign can be found just as they were when they fell during the destruction of the Temple.

The Davidson Center - a technologically advanced museum, built within the remains of a Muslim palace, which provides a glimpse into the way of life and the various religions which flourished in Jerusalem throughout history.