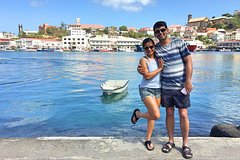 Get a personalized introduction to the scenic, southern part of Grenada with a 2-hour, private tour for your group of one to three people. Enjoy the flexibility of a fully customizable, private tour that includes pickup and drop-off at your hotel or cruise ship terminal, and transport by air-conditioned vehicle.

Towering 175 ft above the St. George's harbour, Fort George is not only the oldest but undoubtedly the most significant fort on the island has always stood at a focal point as major changes occurred in political and military landscape of Grenada.

Dating back to the 1600s, while Grenada was still a French colony, Fort George was originally known as Fort Royal. Designed by Francois Blondel in 1666 and built the year after, Fort Royal served as a battery with commanding views over the Carenage, then the central port of entry and La Ville du Fort Royal (now St. George's), the hub of economic, political and social activities on the island.

Grenada's market is one of the most colourful in the Caribbean. It is at its very most colourful on Saturday mornings: full to bursting, bustling, all tables laden with fruit, vegetables and, this being Grenada, spices.

The Grenada National Museum is a museum in St. George's, Grenada. It is housed in a building which served as the French barracks from 1704, built on the foundations of the Fort George. It was used as a prison by the British for female inmates until 1880