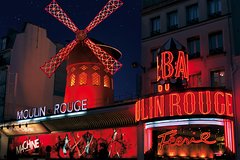 The Moulin Rouge is the number one show in Paris, if not the whole of Europe. No wonder it sells out quickly! Don't miss your chance to see the world-renowned showgirls and French Cancan dancers strut their stuff on the Moulin Rouge's historic stage.

Moulin Rouge Paris sells out months in advance. If you'd like to see the Moulin Rouge show "Féerie" (105 minutes), pre-book your 9pm or 11pm tickets (including champagne!) here. For 110 years, the most legendary French cabaret has welcomed millions of spectators who have come to admire the famous French Cancan. Book ahead of time to avoid disappointment.

Le Moulin Rouge is world famous thanks to its French Cancan, and immortalized by the painter Henri de Toulouse-Lautrec. The sumptuous shows at the Moulin Rouge feature feathers, rhinestones and sequins, fabulous settings, original music and of course... the most beautiful girls in the world.

Many international stars have performed on stage at the Moulin Rouge including Ella Fitzgerald, Liza Minnelli, Frank Sinatra and Elton John. They have all put on exceptional shows, following in the footsteps of French celebrities such as Maurice Chevalier, Jean Gabin, Edith Piaf and Yves Montand.

Moulin Rouge Paris sells out every night. By pre-booking tickets you'll lock in the price, secure seats and get the most out of your precious vacation time in Paris.

Please be advised that this performance contains partial nudity, and may not be appropriate for all audiences.