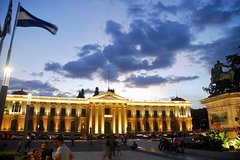 Explore the highlights of the city with a native of San Salvador. Important monuments and historical spots, main avenues, commercial and residential districts watching landmarks and monuments that commemorate relevant historical figures and events.

Many public buildings in El Centro where made during the golden age of coffee exports with a wide mix of architectural styles: Classical, Renaissance, Art Nouveau, Gothic, Neo colonial, Arab, etc. With the recent renovation Downtown is nicer and safer than ever to walk. Different business are boosting out and has become the place to be.

Walk this streets learning details events that occurred on this very place over almost 500 years of history and the people that took part in it. From colony to Independence. From the Federation to the Coffee Republic. From military regimes to democracy. From repressions to big celebrations.

San Salvador is the second largest metropolitan area in Central America behind Guatemala city and was (re)founded on the current location in 1545. Since it has been the historical, economical, social and political center of El Salvador. During almost 500 years this city and its people had faced earthquakes, invasions, revolutions, celebrations always rising from the ashes to become an eclectic and vibrant metropolis.

Start your exploration at El Centro, the Old City, walking among the main historical plazas: Libertad, Morazán y Barrios (Main Square), learning about the struggles, events and people this monuments on this places commemorate. There's always something going on in Downtown: public events, streets performers, some noisy street preacher or even political or cultural displays. After the most recent renovation walking in downtown is easier and safer than ever. Even after dark when the new lightning of the historical buildings is turned on. Continue with a visit to the impressive El Rosario church, one of the most enigmatic buildings as well one of the best samples of the Brutalist Architecture in Latin America. José Matías Delgado, our nation's Founding Father is also buried in this church, together with 21 protesters repressed on the streets of San Salvador in 1979.

Another important historical spot in our program is the massive Metropolitan Cathedral, built along more than 40 years. Was in this temple where our beloved Archbishop Oscar Romero addressed many of his speeches denouncing the state's repression and where his body lays. No visit to Cathedral would be complete without visiting Romero's tomb which was a pilgrims destination since his death in 1980. World leaders had come to this place to pay honor to Romero's universal legacy. Enjoy panoramic views of historical buildings such Palacio Nacional and Teatro Nacional (Opera House) and Central Bank's Library built with an exquisite style, with the finest imported materials, during the boom of coffee exports on the early XX Century.

But not all is history and old buildings. In Downtown you will relax watching locals passing by while enjoy a steamy cup of fresh Salvadoran coffee or toast with a domestic craft beer in one of the recently restored buildings (or have an order of pupusas later on). Then continue along main avenues on a panoramic tour watching important monuments such as the Civil War Victims Memorial in Parque Cuscatlán; the 1944 Revolution and El Salvador del Mundo Monuments while we drive through commercial and residential districts as Colonia Flor Blanca, Escalón, San Benito, Zona Rosa and Santa Elena.