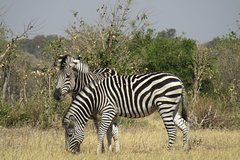 See the wild from the closest view possible from land and from a boat.
Enjoy awesome food while viewing game drink on the bank of the Chobe River.
Capture amazing photographs of wildlife from different angles.

Visit the Chobe National park and make a date with various animals in their natural home. The Chobe Park is reckoned as one the largest national parks inhabiting large numbers of wildlife. The park homes thousands of elephants, the buffaloes and other animals including predators.
Chobe is surely the best place in Africa to see elephants, particularly in the water. Individual herds sometimes number in the hundreds and there are an estimated more than120,000 elephants in total in the park. There are equally large herds of buffalo to be found. In fact, both can often be seen outside the park boundaries wandering around the outskirts of Kasane itself, unperturbed by traffic or people.

The park also offers great lion and leopard sightings, while the river has an unbelievable abundance of hippos and crocodiles and an almost inconceivable wealth of birdlife, including a number of particularly rare species that are highly sought after by top wildlife photographers. This is just a small glimpse of what Chobe has to offer.