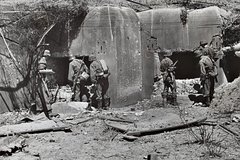 You will be able to see part of World War 2 history - Stalin Line!

The Stalin Line was a line of fortifications along the western border of the Soviet Union. Work began on the system in the 1920s to protect the USSR against attacks from the West. The line was made up of concrete bunkers and gun emplacements, somewhat similar to, but less elaborate than the Maginot Line. It was not a continuous line of defense along the entire border, but rather a network of fortified districts, meant to channel potential invaders along certain corridors.

During your excursion you can additionaly visit museums that is located at Stalin line complex, also you can try to shoot from different weapons.

You will be able to see part of The Stalin Line.

Minsk Fortified Region was the strongest fortified region of the Belorussian Military District. Its main function was to protect Minsk as an important economic and political centre as well as a major transport hub.

Special Offer - Book by January 20 to save 10% off our previously offered price! - Book Now!