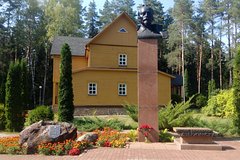 Private tour to "Iron" Felix Dzerzhinsky museum-estate birth place.
Felix Edmundovich Dzerzhinsky was was a Bolshevik revolutionary and official, he led the first two Soviet state-security organizations, the Cheka (later KGB) and the OGPU, establishing a secret police for the post-revolutionary Soviet government.
Besides his leadership of the Cheka, Dzerhinsky also took on a number of other roles; he led the fight against typhus in 1918, was chair of the Commissariat for Internal Affairs from 1919 to 1923, initiated a vast orphanage construction program, initiated the fight against illiteracy, chaired the Transport Commissariat, organised the embalming of Lenin's body in 1924 and chaired the Society of Friends of Soviet Cinema.

In 2005, the Government of Belarus rebuilt the manor house of Dzerzhinovo, where Dzerzhinsky was born, and renovated museum. During our tour you will know history of Felix Dzerzhinskiy and its family, look at personal things (table, where he worked, personal briefcase, umbrella), gifts and souvenirs from foreign visitors.
Annually, the graduating class of the KGB academy of the Republic of Belarus holds its swearing-in at the estate.
In 1943, the estate had been destroyed and family members (including Dzerzhinsky's brother Kazimierz) were killed by the Germans, because of their support for the Soviet Army.
Dzerzhinovo is located in beautiful forest. You can enjoy this place, pick mushrooms and berries, relax and forget about the bustle of the city.
On our way one can enjoy beautiful Belorussian fields and forests, 2 catholic churches, and usual hinterland life.
Duration: about 4h 30m.
way to Dzerzhinovo 1h 30m
Excursion 1h 30m
way back to Minsk 1h 30m
Tour is private, so you can stay in Dzerzhinovo for extra time.

Also I can make for you some other exclusive tour from visiting secret Soviet bases to Minsk sightseeing tour with fantastic Lincoln Continental Mark V convertible or authentic Soviet\russian generals car GAZ 3102 "VOLGA". Feel free to contact me with any questions, additional photos e.t.c.