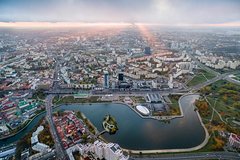 It's a rarity these days that you'll find people who absolutely love their jobs. I'm one of those few. During Minsk City Tour I will uncover the stories and details of my native town, the main attractions of Minsk, make them come alive. You'll have the chance to view a place through the eyes of a local. We will walk along Independence Avenue, a unique example of a Stalin Empire style, visit the historic center, Liberty Square, discuss the unusual design of the National Library. I can recommend buzzing bars and rave-review restaurants, where you will try belarusian cuisine and traditional drinks.

During our excursion we will visit the main squares:

Independence square - the administrative center, where the
House of Government and the biggest monument to Lenin in the former Soviet Union are situated. You will see the early 20th century
Red Church (or the "Church of Saints Simon and Helena" ), that was constructed in the memory of Belorussian noble's children.

Liberty square is our cultural and religious center.
Minsk City Hall, a symbol of the Magdeburg Rights,
The Holy Spirit Cathedral and Saint Virgin Mary's Archcathedral, one of the main Shrines of Catholicism in the Republic of Belarus, in the style of Vilnius Baroque are located there.


No doubt that Minsk has preserved its Soviet legacy much better than many other cities of the former Soviet Union. We will ride along
Independence Avenue, a unique example of a Stalin Empire style, one of the longest streets in Europe and a candidate into the UNESCO World Heritage List.

Victors Avenue is a visiting card of the Belarusian sport