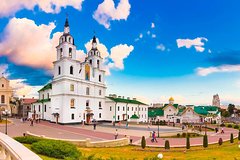 On this interesting 3-hrs auto-walking tour of Minsk you will learn about our city, and see many buildings and monuments that remain as reminders of Soviet time. You will get an unforgettable immersion in the history of the city. Individual approach and unique service guaranteed!

Minsk Old Town - today's Freedom Square - one of the top Minsk tourist attractions. This area today features a number of significant historic buildings. Restored and renovated churches, cathedrals and secular buildings (Minsk Town Hall among them) will help you to delve in the countrys past.

The Trinity Suburb will take us to the beginning of the 19th century. Today, it is a kind of open-air museum  colorful small houses and cozy courtyards. Trinity suburb is one of the recommended visit for the city of Minsk. Very close to the suburbs is the Island of Courage and Sorrow - a monument to the Belarusian soldiers who perished in Afghanistan at the end of the last century.