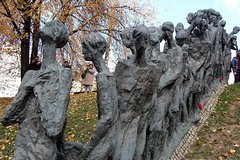 Minsk became a Jewish city and one of the largest Jewish community in the Russian Empire. In the 12th there was a large number of enterprises owned by the Jews, Minsk became the center of Jewish business. One of the most famous Minsk Jewish quarters - Rakovskoe suburb-has survived to the present day. This area has become the center of the Minsk ghetto - a place of painful death of thousands of Belarusian Jews, thousand of Jewish families were deported to the Western Europe. It is a place of desperate struggle for freedom and life, the memory of which Minsk residents keep to this day. Minsk Jewish is a rich historical heritage of the Belarusian capital.
During this tour you will visit the most important places in the history of Jews: Pit memorial, former Jewish burying place, former women Jewish college, synagogues, etc.

The Pit is a monument on the corner of Melnikayte and Zaslavskaya streets dedicated to the victims of the Holocaust in Minsk, Belarus. It is on the site where, on March 2, 1942, the Nazi forces shot about 5,000 inhabitants of the nearby Minsk Ghetto.

Walk around the Jewish quater.