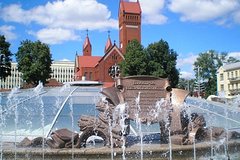 On this interesting 3-hrs auto-walking tour of Minsk you will learn about our city , and see many buildings and monuments that remain as reminders of Soviet time. You will get an unforgettable immersion in the history of the city. Minsk was first mentioned in chronicles of the 11th century, and 950 years later, its still keeping its secrets and mysteries. Our experienced guides will tell you interesting facts and stories about Minsk and Belarus. Our company has a good reputation and lots of positive reviews with 5-star rating on TripAdvisor and Google. It is enough to read reviews from our customers to understand how we are proud of the quality of our services. Individual approach and unique service guaranteed!

These two 11 storey buildings resemble the towers of an ancient castle. They are powerful structures that mark the entrance to the city. One of the towers has a huge clock  it's the biggest clock in the republic.

A visit the Freedom Square - the historical center and the heart of the city. Here you can see the Cathedral of the Holy Spirit, the Church of the Blessed Virgin Mary, the Town Hall, the Gostiny Dvor, a complex of former Uniat monasteries, beautiful sculptural compositions. In the cathedral of the Holy Spirit you will have the opportunity to see the most valuable Orthodox shrine of Belarus - the oldest icon of the Minsk Mother of God.