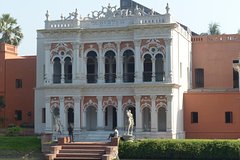 Spend a Full-day exploring Sonargaon; the ancient capital of Bengal. You will Learn about the ancient history and culture of the country through visiting mentioned places and through a boat ride to a beautiful small island of the mighty River Meghna, Experience your visit to the Folk Arts & Crafts Museum, and the abandoned city of Panam, accompanied by a professional Historian guide. Explore your round-trip from Dhaka including a Traditional local lunch and all entrance fees to attractions.

The University of Dhaka is one of the oldest university in modern Bangladesh. Established during the British King in 1921, it gained a reputation as the Oxford of the East during its early years and has been a significant contributor to the modern history of Bangladesh. After the partition of India, it became the focal point of progressive and democratic movements in Pakistan. Its students and teachers played a central role in the rise of Bengali nationalism and the independence of Bangladesh.

Sonargaon is a historic city in central Bangladesh. It is one of the Ancient capitals of the historic region of Bengal and was an administrative center of eastern Bengal. It was also a port and trading center started from the Medieval era to British colonial rule, merchants built many Indo-Saracenic townhouses in the Panam neighborhood. You will visit Royal Palace and its adjacent folk Art and craft museum.

One of the most glorious place of Sonargaon that offers ancient traditional structural and architectural views from Medieval Era, with its enormous beauty is really refreshing for a person who love to take photographs, observe the nature and history together. An amazing set of ruins, mostly from the Hindu era, with architecture influenced by Greece, Europe, China; the buildings are in various states of disrepair but there are still many interesting things to see.

You will experience a Wooden-boat ride on the mighty River Meghna to see local lifestyle and their traditional daily activities, our all travelers liked this journey very much. Hope you will love it too.