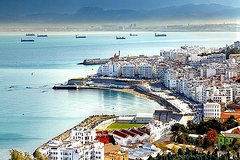 Explore the history and culture of Algeria, with French charm and influences from the Romans and the Turkish, through the older, indigenous culture of the Berbers.

Stop At: Kasbah of Algiers, Algiers Algeria
Arrive in Algiers and transfer to your hotel. Embark on an afternoon sightseeing tour of the city including Martyrs Memorial, the Basilica of Our Lady of Africa and a drive through the city center. Overnight at Ibis Hotel or similar
Duration: 1 day

Stop At: Ruines Romaines Tipaza, Tipasa Algeria
destination Tipasa, home to an amazing collection of archaeological remains. On the way we visit the 'Tomb of the Christian', believed to date back to the 3rd century BC and belonging to the Numidian people. We continue to the World Heritage Site of Tipasa, a fantastic collection of Roman ruins overlooking the sea and an ancient amphitheater.

Stop At: ORan, Oran, Algeria
we drive along the coast to Oran, Algeria's second city. We spend time exploring the city including the Bey's Palace and the 18th century Grand Mosque. Overnight at Ibis Hotel or similar, Oran
Duration: 2 days