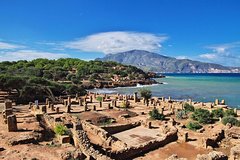 This tour will help you to discover one of the beaten paths of the Roman ruins of Tipasa on the coast side of the Mediterranean. It will allow you also to see and explore the rich museum of Cherchell and the Royal Mausoleum of Mauretania.

At about 60 kms west from Algiers along the Mediterranean coast stands on the foot of the Chenoua mountain spectacular Roman Ruins of Tipasa.
Tipasa was founded in the 5th century BC by the Phoenicians, later turned into a Roman military colony by Emperor Claudius 1st.

The National Public Museum of Cherchell is in charge of the conservation of the ancient pieces of Algeria during Punic, Roman, Muslims time.

The Royal Mausoleum of Mauretania is a funerary monument located on the road between Cherchell and Algiers, in Tipaza Province built in 3 BC