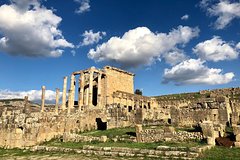 Djémila the Beautiful one, Latin: Cuicul or Curculum, formerly Cuicul, is a small mountain village in Algeria, near the northern coast east of Algiers, where some of the best preserved Berbero-Roman ruins in North Africa are found. It is situated in the region bordering the Constantinois and Petite Kabylie (Basse Kabylie). In 1982, Djémila became a UNESCO World Heritage Site for its unique adaptation of Roman architecture to a mountain environment. Significant buildings in ancient Cuicul include a theatre, two fora, temples, basilicas, arches, streets, and houses. The exceptionally well preserved ruins surround the forum of the Harsh, a large paved square with an entry marked by a majestic arch.

As its Arabic name says "Beautiful", It is one of Algeria's best-preserved Roman sites. It is 900 m above sea level, beautifully nestled amongst a rolling hill with breathtaking green landscapes. Founded by Nerva as a Roman military garrison in the 1st century AD, but back then the name was Cuicul.