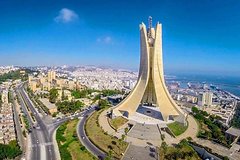 This is an interesting tour which unfolds the beauty and charm of an old and new Algiers & youll discover the Casbah, a unique kind of Islamic city. A UNESCO world heritage & stands in one of the finest coastal sites on the Mediterranean; old mosques and Ottoman-style palaces as well as the remains of a traditional urban structure associated with a deep-rooted sense of community, the best place for a traditional lunch is included, estimated walking Distance 3 Km , It is best to wear comfortable shoes to walk.

We visit the beautiful Church of Notre Dame d'Afrique that dominates the long bay above Bab El Oued and it offers a beautiful view with a stunning interior design and has a fine ecclesiastical architecture.

Our next bet will be the old 10th century city known as the Kasbah "The Citadelle" where you are going to walk on the cobbled narrow streets and explore the complex houses, palaces and mosques dating back the Ottoman period.

We reach to one of the most preserved Ottoman mosques of the lower Kasbah and the first great building many people see, the 17th century Ketchaoua Mosque.

We reach to one of the most preserved Ottoman mosques of the lower Casbah and the first great building many people see, the 17th century Ketchaoua Mosque.

We move again to one of the most important, prestigious and historical monument of Algiers, Bastion 23 Palace which is located in front of the sea. It is a set of three palaces (17, 18 and 23) and you are going to discover the historical aspect and enjoy roaming through secrets rooms inside it.

We head past the mosque of the Fishermen and walk along the Seafront facing the sea. It just reminds you instantly of the port of Marseille with colorful small vessels and you will also find set of beautiful European buildings.

We make our way to the downtown just off the main road of the Martyr's Square where you can see a large modern mosque in vivid yellow color and an ex-colonial church.

We walk past the most colossal building of the downtown, Grand Post office which is a fine example of French-designed, early 20th-century Moorish architecture.

After finishing up with the busy downtown, we head to one of the most inviting places in Algiers, the Botanical Garden of El Hamma, a large garden dedicated to the collection and preservation of wide range of plants, gigantic trees and a central area with fountains and lawns. It's a great area to escape the heat and relax.

Our next stop will be the landmark and the most imposing 92-meter-tall Monument to the Martyrs, situated on a hill and overlooking the whole city and apparent from different angles of Algiers. You will get a pretty great shot from certain vantage point.

Then you will be transferred to your hotel