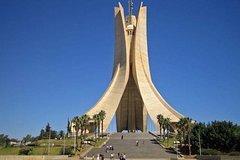 03 hours guided tour to visit one of the main sightseeing in Algiers.

09.00 AM Pick up from the hotel for a guided tour to visit The Maqam Echahid (Martyrs' Memorial), is a monument to the Algerian War for Independence. The monument was opened in 1982 on the 20th anniversary of Algeria's independence.

The Martyrs Memorial is a representation of three palm leaves standing together. At the edge of each palm leaf there is a stone soldier standing guard. Underneath the dramatic stone fronds is an eternal flame.

Built on the site of an ancient fort, the striking monument is a tribute to the soldiers that lost their life in the Algerian War of Independence which raged from 1954  1962.

after the tour return back to the hotel